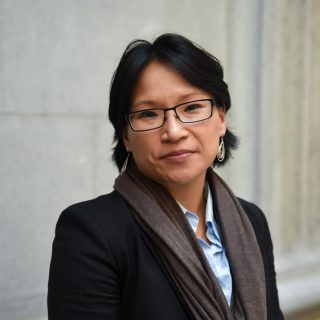 Christina is a founding partner at Becker & Lee LLP. She received her law degree, JD, from King Hall, UC Davis School of Law in 2003, and her Bachelor of Arts in Economics, from Barnard College, Columbia University.

Christina has represented clients in removal proceedings before the Immigration Court, the Board of Immigration Appeals, and the Ninth Circuit. She has also represented many clients in Federal District Court filing mandamus lawsuits against the U.S. government. Including removal defense, Christina has experience in asylum, employment-based immigration, family-based immigration, naturalization applications, hardship and criminal waivers, consular processing, and representing victims of abuse, crimes and human trafficking.

Christina currently serves as the EOIR co-liaison to the San Francisco Immigration Court for the American Immigration Lawyers Association (AILA) Northern California Council. Her past roles on the Council have included co-coordinator for the Young Lawyer’s Division and as the Advocacy co-coordinator where she organized local and national meetings in D.C. with Congressional representatives to advocate for immigration reform. She is currently a council member of the UC Davis School of Law Immigration Law Clinic Alumni Council (ILCAC). Since 2013, Christina has been selected to the Northern California Super Lawyer’s Rising Stars list for immigration law.

Christina is a mentor attorney and regular panel speaker for the pro bono asylum program of the Lawyers’ Committee for Civil Rights (LCCR), and a volunteer attorney with Centro Legal de la Raza and the Asian Law Caucus, immigration detention mentor for Pangea Legal Services, and serves “Of Counsel” to the National Center for Lesbian Rights (NCLR) for their pro bono asylum cases.

She also served on the Advisory Board to the Northern California Collaborative for Immigrant Justice (NCCIJ) which released its October 2014 Study: “Access to Justice for Immigrant Families and Communities: Study of Legal Representation of Detained Immigrants in Northern California,” authored by Stanford Law School Immigrants’ Rights Clinic. She is also currently part of NCCIJ which is working to obtain universal representation for detained clients.

Christina is the daughter of Korean immigrants – she is fluent in conversational Korean.