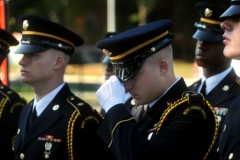 In 2010, Janet Napolitano, Former Secretary of the Department of Homeland Security (“DHS”), informed Congress of certain immigration benefits provided to military families to allow their family members to become green card holders without departing the country and waiting abroad while their immigrant visas were processed.  On November 15, 2013, the Director of U.S. Citizenship and Immigration Services (USCIS) issued a memorandum about one such administrative remedy – “parole in place” for the undocumented parents, spouses, and children of U.S. military personnel.

What is parole in place? It is a policy that allows the undocumented family members of U.S. military personnel to adjust status in the U.S. and become lawful permanent residents without being required to leave the country. For foreign nationals who entered the U.S. without inspection, this is a significant development because barring minor exceptions, a person who has not been “admitted or paroled” into the U.S. cannot gain permanent residency without first leaving the U.S. and being interviewed at a consular post abroad. INA §245(a). But undocumented individuals are caught between a rock and a hard place: they aren’t permitted to adjust their status inside the country because they have not been “admitted or paroled,” yet upon leaving the U.S. to apply for the immigrant visa, they almost always trigger inadmissibility grounds based on their unlawful presence in the U.S.

When unlawful presence bars are triggered, individuals are required to remain outside the U.S. for either three or ten years, depending on the length of their prior unlawful presence in the U.S. Although these bars can be waived, the legal standard is onerous and arbitrary. Waivers are only granted if USCIS is satisfied that the U.S. citizen or lawful permanent resident spouse or parent (not child) will experience extreme hardship if the foreign national is not allowed to come back to the U.S. as a lawful permanent resident. Both preparing and adjudicating the waiver can take many months, and positive outcomes are far from guaranteed. The process is grueling for families who remain in a state of constant fear and uncertainty about their futures.

Parole in place offers a way out – at least for family members of U.S. military personnel who entered the U.S. without inspection. If parole in place in granted (always in one-year increments), these family members can adjust their status to lawful permanent residents without ever leaving the country and triggering unlawful presence bars that might require a long separation from their loved ones in the U.S.

Parole in place finds its statutory basis in INA §212(d)(5)(A). The statute gives the Secretary of the Department of Homeland Security discretion, on a case-by-case basis, to “parole” for “urgent humanitarian reasons or significant public benefit” an applicant applying for admission to the United States. The language of the memorandum has raised questions. It first states that parole in place is to be granted “only sparingly.” It then explains that being a spouse, child or parent of U.S. military personnel “weighs heavily in favor of parole in place” and that absent a criminal conviction or other serious adverse factors, parole in place would generally be appropriate exercise of [DHS’] discretion . . .”

In a climate as politically polarized as the U.S. today, it is not surprising that the memorandum has elicited praise and criticism in equal measure. Supporters stress that the memorandum is merely a clearer articulation of a policy already in place and being implemented for decades now. They argue that parole in place for military members is consistent with the statutory requirement that it be granted for urgent humanitarian reasons or significant public benefit because “military preparedness is adversely affected when members of the U.S. Armed Forces are worried about the immigration status of their family.” Critics, on the other hand, see a hidden agenda behind parole in place, and are calling it “amnesty by small drips.” The Federation of American Immigration Reform’s Dan Stein has described it as a way “to overcome statutory limits on immigration.” But the Obama Administration remains firm in its position that the rule is not creating any new legal status requiring Congressional action.

Moving forward, immigration practitioners should be aware of parole in place as an option for clients with U.S. military personnel family members. The memorandum contains useful information on how to apply for parole in place, and what additional documentation should be provided in addition to Form I-131 Application for Travel Document.