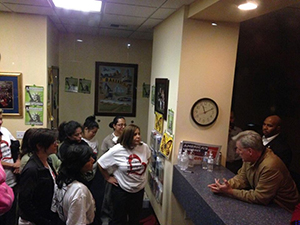 On November 7, 2013, a group of mostly immigrant women occupied the Bakersfield, California office of House Majority Whip Kevin McCarthy.  The group demanded that the California Republican commit to bringing a bipartisan immigration bill to the floor in the House of Representatives.   Congressman McCarthy met with the women, who staged a sit-in in his office.  Apparently, the women are allowed to remain in  McCarthy’s office, but will not be allowed to leave for food or water.  If they leave, they will not be allowed to return.