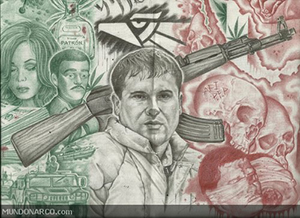 Mexico’s most-wanted narco-trafficking kingpin, known as “El Chapo Guzman,” was arrested on Saturday, February 22, 2014 at a hotel in the resort town of Mazatlan, Mexico.  Mr. Guzman is one of Mexico’s richest citizens and is reported to be the head of the “Sinaloa Cartel,” one of Mexico’s most powerful drug cartels.  The Sinaloa Cartel is rivaled by another powerful narco-trafficking group called the Zetas. Credible media sources, as well as Mexicans in the United States, frequently claim that El Chapo Guzman’s cartel engages in torture and atrocious forms of violence.

Although the Mexican government arrested El Chapo Guzman, many government and media sources suggest that certain Mexican government officials are working closely with the cartels and specifically with Chapo Guzman’s network. For example, in “El Narco,” investigative journalist Ian Grillo reports that in “2008, a government probe code-named Operation Clean House, uncovered a network of twenty-five federal officials on the payroll of the Sinoloa Cartel. Among them were soldiers, federal police commanders, and detectives.”

The link between Mexican government officials and drug cartels is a key piece of evidence required for Mexican Convention Against Torture and other claims such as asylum and withholding of removal.  To win a Convention Against Torture claim, an applicant needs to show that it is more likely than not that she or he would be tortured if returned to his or her home country.  In addition, the applicant must show that the torture would be with the consent or acquiescence of a public official.

El Chapo Guzman’s arrest sheds light into one of the key criteria for Convention Against Torture relief for Mexicans fleeing torture at the hands of drug cartels.  The Department of Homeland Security will likely argue in such cases that the fact that the Mexican government arrested Chapo Guzman shows that they will have not consented or acquiesced to the cartel’s alleged torture.

The Ninth Circuit, in a 2013 case called Tapia Madrigal v. Holder, made clear that an applicant for Convention Against torture based on a fear of torture from Mexican narco-trafficking rings, “need not show that the entire foreign government would consent to or acquiesce in his torture.  He need show only that ‘a public official’ would so acquiesce.” The Ninth Circuit went on to emphasize that there is clear evidence that “corruption of public officials in Mexico” is a common problem with “police officers and prison guards frequently working directly on behalf of drug cartels.”

Although the Mexican government participated in the arrest of “El Chapo Guzman,” Mexican Convention Against Torture cases remain a viable form of relief for Mexican nationals in the United States whose family members have been tortured and/or who can establish that they are more likely that not to be tortured at the hands of cartels if they return to Mexico.